This historic picture of the laying of St Luke’s Foundation Stone on the 9th June 1900 is worth studying.

The photographer is standing above the crowd of spectators, roughly at the back of the choir vestry or where the Altar now stands, and possibly on some scaffolding or early masonry.

We can see a block and tackle rigged up to lower the heavy stone into place at the north west corner of the building. Around it are various clergymen, including the Dean of York, the Very Revd Arthur Purey Cust, and the Bishop of Beverley, the Rt Revd Robert Crosthwaite.

Purey Cust is commemorated in the City by the Purey Cust Nuffield Hospital, beside the Minster, while Robert Crosthwaite was Bishop of Beverley for twenty seven years until his death in the 1920s. His name was so closely linked with the title by then that there were no more Bishops of Beverley until the title was revived in the 1990s. It is thought that the dark robed figure facing towards the left of the picture is Dean Purey Cust.

We know that among the gentlemen in the centre of the picture is the Lord Mayor of York, and of course George Faber, the Conservative Member of Parliament for York, whose name appears on the stone. Faber is commemorated in the name of Faber Street, an unassuming short road near Layerthorpe. Perhaps architect Walter Brierley is present too – and we can only speculate about the finely-clad ladies in the party who are presumably the wives of the all-male dignitaries. The other clergy probably include those from the mother church of St Olave, Marygate, and perhaps others from the City and Deanery of York.

Around them are, we assume, the people of Burton Stone Lane and its surrounding streets, turned out for the most part in their Sunday best to see the fun. They aren’t all paying attention though – apart from the three little girls in the foreground, look at the bowler-hatted gent on the right who has had enough for now. Let’s hope there was a good party afterwards.

Shorter and younger members of the group have bagged some chairs to see from the back, perhaps from the ‘tin tabernacle’ or mission hall behind and to the right of the photographer, where the church hall now stands. Towards the left of the picture there appears to be a parked horse-drawn vehicle of some kind – had it brought the dignitaries, or even the stone itself?

The surroundings too are worth a look. The house on the opposite corner of Shipton Street is unmistakable today, although the hedge is now much bigger. On the far side of Burton Stone Lane there is still an open field with a hedge, where today there are semi-detached houses built between the two world wars. Beyond the large tree on the left, New Lendal Congregational Church was built some years after the picture was taken. St Lukes’ services shifted there for a few weeks in 1985 while the painters were in, but within ten years it had closed down, and now its site is given over to a small group of 1990s houses at the end of St Luke’s Grove.

This picture is a treasured record in the life of St Luke’s Church and the area it serves. What became of all the people in the picture? Are their descendants still coming to St Luke’s? 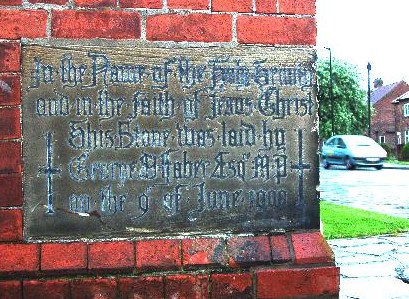 And what about that stone? Well, here it is in 2004, doing the job for which it was placed there on that day in 1900. The inscription reads,

In the Name of the Holy Trinity and in the faith of Jesus Christ. This Stone was laid by George Faber Esq MP on the 9th of June 1900.

And as for the little boys in their starched collars standing on chairs to see from the back of the crowd, how many of them made it through the Great War?